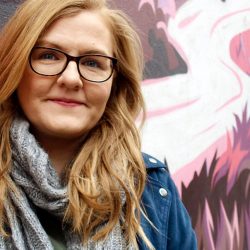 Based in: Belfast, Co. Antrim

I have worked in publishing since 2003, and for over thirteen years was an in-house editor, proofreader and production editor for the prestigious Irish publisher, Blackstaff Press. However, I often wore other hats: project manager, permissions expert, typesetter, and even, if a Mac or printer let us down, tech support.

I am also an experienced educational editor, working for several years with Colourpoint Education, where I edited and proofread books and resources for KS3, GCSE and A level.

‘I first worked with Michelle Griffin in the editing of two manuscripts which eventually led to the publishing of my books on Milltown and Belfast City Cemeteries in 2014. The relationship between editor and author has the potential to generate depression, anxiety and lots of sleepless nights. This was not the case with Michelle, her professionalism and meticulous approach was balanced by a generosity of spirit and the ability to extract my literary best as we edited our way through my manuscripts.’
Tom Hartley, Lord Mayor of Belfast 2008-09, ‘Written in Stone’ series

‘Michelle is an excellent and dedicated editor and I believe her editing input substantially improved my manuscript. The vast majority of changes that she suggested I make were eventually incorporated into the finished text. Now, when I read the book, I am really glad those changes were made. She struck the right balance between improving the narrative while remaining focused on the deadline. She was meticulous and thorough and I found working with Michelle enjoyable and hugely beneficial. Apart from being personable, she is forthright, honest and committed. I cannot recommend her highly enough.’
Kevin Doyle, A River of Bodies (2019)

‘Behind every good author there is an even better editor. Michelle Griffin is one such editor who will take your manuscript and make it stronger. I had the pleasure of working with her on my book and she had a firm hand when needed but managed to work her magic with a smile and a certain quietness. She did an excellent job, I cannot recommend her highly enough.’
Colin Breen, A Force Like No Other: The Next Shift (2019)

‘To Michelle Griffin and all the crew … for their energy and commitment.’
Gerald Dawe, Earth Voices Whispering: An Anthology of Irish War Poetry 1914-45 (2009)

‘It was a privilege to work with you on the St Patrick book. You understood exactly what I was trying to do and were ever helpful and supportive throughout.’
John Killen, The St Patrick’s Treasury (2016)

‘Michelle worked with me … with great understanding of the subject.’
Sophia Hillan, May Lou & Cass: Jane Austen’s Nieces in Ireland (2011)

‘Michelle removed only the right things … It couldn’t have been done without you.’
Reggie Chamberlain-King, Weird Belfast: A Miscellany, Almanack and Companion (2015)

‘Thanks to editor Michelle Griffin for her endless patience in the struggle to make it seem like we knew what we were writing about.’
Geoff Hill & Colin O’Carroll, Oz: Around Australia on a Triumph (2014)

‘Michelle added and subtracted, chiselled and sculpted my original manuscript into something worth reading. It has been enlightening.’
Lee Henry, Belfast Taxi: A Drive Through History One Fare at a Time (2013)

‘Particular appreciation is due to Michelle for her advice and for patiently guiding me through the consultation and editing processes of publishing.’
Tom Thompson, Auld Hands (2013)

‘I wish to acknowledge the help provided by my editor, Michelle Griffin, whose suggestions were always cogent and the execution of which have undoubtedly made this book better.’
Lesley Veronica, Northern Ireland Government and Politics for CCEA AS Level (2017)

‘I’ve been incredibly fortunate to find an inspiring editor in Michelle Griffin, who gave me just the right push to keep developing my story. Such connections give me a feeling that I’m going in the right direction.’
Mary Rume, Stone Flower (2021)

‘Huge thanks to my editor, Michelle Griffin, for her skilled and tireless commitment to the novel.’
Kevin Doyle, A River of Bodies (2019)

‘Michelle has spoiled me rotten in terms of what editors are really like. I dread the first time I work with anyone else.’
Laurence Donaghy, Folk’d Up (2014)

‘Thanks for taking us on, we hope you enjoyed it as much as us.’
Terri Hooley & Richard Sullivan, Hooleygan: Music, Mayhem, Good Vibrations (2010)

‘Michelle [did] a brilliant job on the edit, as she had on the previous book about Oz.’
Geoff Hill, In Clancy’s Boots (2013)